At the core of all Australia’s current economic worries and problems concerning sluggish GDP growth, restrained consumer demand, low wage and price growth and falling house prices is not the tightening of lending standards, but rather too much household debt.

While lending standards have been tightened, the majority of the restriction in mortgage credit has occurred because less “liar loans” are being approved now that borrowers’ actual expenditure is being assessed and adequate safety margins are being implemented by banks.  To relax credit standards back to the previous regime would require a repeal of the current responsible lending laws which is unlikely to happen post the Hayne Royal Commission.  Additionally, with the current lawsuit by Maurice Blackburn against Westpac, it is unlikely these responsible lending laws will largely be ignored by lenders as they have been in the past. 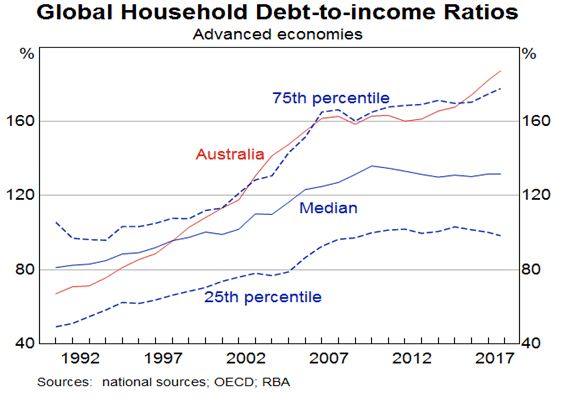 Within this trend, Australia has moved from a relatively “low debt” country in the 1990’s to one of the highest in the developed world.  Simply stabilising the level of household debt will provide a drag on the Australian economy.  While most of the debt is mortgage debt, both businesses and consumers have been allowed to take on more debt as their house values have appreciated and they have used a portion of this increased debt to finance increased consumption.

In the long run, the level of household debt will need to decline, not just stabilise.  This is because when interest rates rise, debt serviceability will become more difficult if not impossible for many households.  Although no rate rises are expected in the near term, it is almost certain Australian interest rates will rise over a ten or twenty year period and if they don’t it will be because Australia has fallen into a Japan like situation of permanent low economic growth and low or negative wage and consumer price inflation.

There is no easy solution to the household debt problem.  In periods prior to the early 1990s, high inflation was a solution as this generally meant wages rose  but debt stayed the same (both measured in nominal terms).  However, there is no prediction of high inflation in Australia anytime soon and much less that the RBA’s response to high inflation will be to keep interest rates low to allow everyone’s mortgage to decrease in real terms.  In the US, following the global financial crisis, the solution was widespread defaults on sub-prime mortgage debt and a severe recession; while in the UK, the solution was years of grinding austerity.  It is more likely one of these two options will be Australia’s fate if a replacement for debt fueled economic growth cannot be found.

For individual households, absent high inflation and high nominal wage growth (both of which seem unlikely), the choices are either asset sales to pay down debt (sell the house and rent) or curtailing of consumption to free up cash to pay down debt principal.  The average Australian is not currently in this “head space” still believing the road to longer term riches is to borrow as much as you can to get into the property market as property always increases in value.  It is possible this current housing downturn may change this perception.

From years of comments by the RBA and more recent macro-prudential regulation to limit interest only and investor loans, Amicus believes the RBA and regulators are very attuned to this issue and therefore we believe it is unlikely the RBA will cut interest rates to “save” the property market as this simply “kicks the can down the road”.  It would also encourage households to take on even more debt going forward as the RBA is there to “save” them.  In contrast, the RBA has a clear mandate to “save” the economy and so is likely to cut interest rates to prevent a recession (or mitigate the worst effects of a recession).

Managing these two sometimes conflicting objectives probably means steering a path such that sufficient “financial pain” is inflicted on households that they become more “responsible” in their borrowing and reduce their debt levels, but not such severe “financial pain” they are forced to default on their existing loans or curtail consumption so severely it causes a recession with the associated downward economic spiral of lower spending leading to business failures leading to higher unemployment leading to lower spending.  Hopefully, a middle ground can be found between enjoying smashed avocado on sourdough at the local café and sitting in your unfurnished house eating dog food just to make the mortgage payments.  It will not be an easy course to steer in our opinion and it will not be made easier by the fact that just as house prices were “uncontrollable” on the way up, they will likely also be “uncontrollable” on the way down.

For most investors, there are two choices if they wish to